During the 2016 Easter holiday I read a news story on the BBC website. They have a sidebar for the most clicked and I often look here for short story inspiration because it usually contains some little-known news item that has piqued the public imagination. On this particular occasion, the story that caught my eye was about fifteen severed feet that had washed up along a stretch of coast in British Columbia, Canada. The details were scant but macabre, the first foot was discovered in 2007 and five more appeared on the same coast over the next year, the gruesome discoveries stopped in 2012 and resumed again in 2016 bringing the total number to fifteen. There was speculation that it was a seafaring serial killer, tying chains around his victim’s feet to throw them overboard, theories ran from alien abduction to human traffickers but there was, at that time, no reasonable explanation.

It had a definite Scandi-noir feeling about it that I knew I wanted to explore. I started to formulate a story from the point of view of one of the people who had found a foot. Initially the main character was a woman who was out jogging on the beach with her dog. As I wrote I realised that there would need to be more to it, the main character would need a personal tragedy which added emotional resonance to the initial shock of discovery, so I imagined a partner lost at sea, there being no body to bury giving the protagonist a feeling of affinity to the severed foot, even convincing herself that the foot belonged to her husband.

I have never been to British Columbia so I played with setting the action in Scotland or Ireland but it didn’t feel right.  I have been to Washington State, spending time at La Push on the Olympic Peninsula, you probably know it as a location for the Twilight books and films, it’s desolate and eerie and a lot of things wash up on the shore. I decided to set my story there, it’s only a few miles south of Vancouver Island and I had photographs and memories of walking on the beaches there which made the descriptions easier to conjure. I’ve never been afraid of writing in an American accent, American culture is so familiar to us now and I’ve visited enough times to find it relatively easy to mimic. (Of course I may well get the odd word wrong but a lot of my work is set in the US and I have beta readers who I can ask about Americanisms.) I think as a rule, if you’re not comfortable don’t do it but if you can it’s good to stretch.

The first draft took a week to write. We were on holiday at my Father-in-law’s in Devon and perhaps the change of scene made the words flow faster. About half way through I realised I wanted the couple to be gay. I decided to make the main character a man mourning the loss of his husband who was a fisherman. I wanted to add another level to the story by normalising the couple and placing them out of a city in a remote area. The moment I decided on this it was like a light turning on. I went back over everything and changed what I needed to but deliberately kept the gender of the narrator ambiguous until near the end when he goes to see the local sheriff and is addressed by name. A lot of readers still think it’s a woman even though the name is very specifically male. I find this interesting in terms of expectation – the implication being that I am a woman therefore I have to write about women. I love writing from a male point of view. I do it often and it is very liberating!

Once the first draft was done I did a lot of research. I looked up every article and news broadcast I could find on the phenomenon, there were interviews with the people who had found the feet and law enforcement officials and hundreds of icky photographs. I discovered that most of the feet were found in running shoes, that the ankle was usually bone and the foot still had flesh – it was gruesome and fascinating and provided rich detail for the second and third drafts. 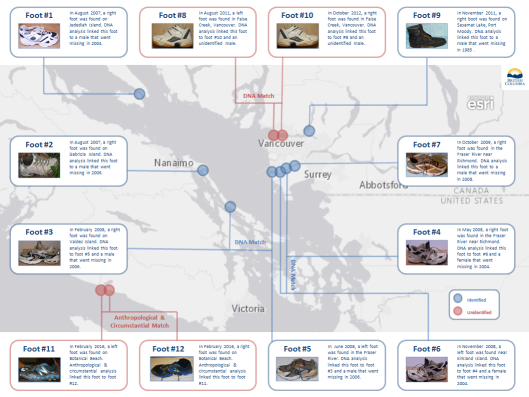 I was really pleased with it when it was done and began sending it off to journals and competitions. Then came the usual round of rejections. On November 9th – two days before my birthday and the day we knew Donald Trump was the next US President – I got a phone call from The Manchester Fiction Prize telling me I’d been shortlisted. If you don’t know, The Manchester Fiction Prize is a big deal, the winner gets £10,000 for a single short story but just getting on the shortlist of six is a major event for any writer. There was a fancy gala in Manchester, I didn’t win, to be honest I don’t think anyone ever expects to win such things, but I did have a fantastic time, a career ambition had been realised and it gave me a huge confidence boost.

The story was published on a pdf on the prize website but I thought it deserved to reach a wider audience. Over the next few years I submitted it everywhere that accepted previously published stories, I  approached journals in all honesty saying it had been shortlisted and appeared in pdf only. I got absolutely nowhere. When my collection, 15 Minutes, came to be published I tried to shoe-horn the story into it, changing some of the details to fit into the theme of fame but it didn’t feel right so I left it out. Thankfully Sixteen Feet has now been picked up by the wonderful Lakeview International Journal of Literature & Arts and you can read it there for free.  I suppose the purpose of this blog post is simply to say never give up on something you think deserves better, eventually when the tide is right it will wash up on shore.

End note – because of this blog post a story for 15 Minutes is now on For Books’ Sake Weekend Read and you can read it here. That’s two free reads from me this week, if you want to read more please buy the book! 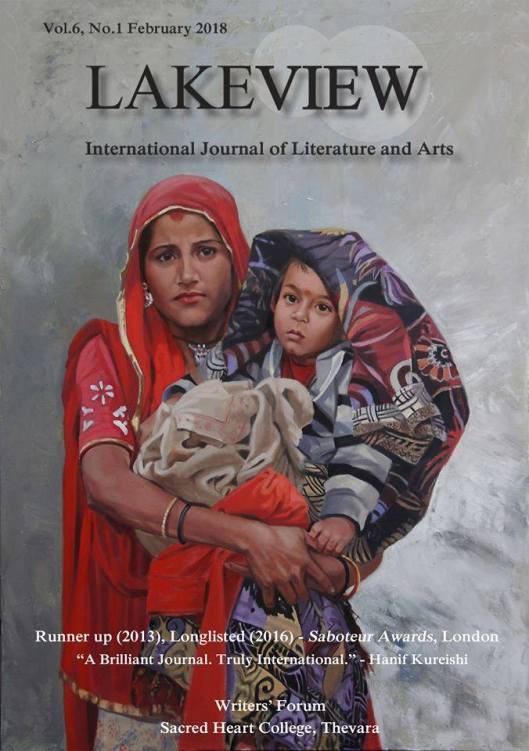 2 thoughts on “Anatomy Of A Short Story”