As traditional in my house as It’s A Wonderful Life, The Grinch or Baileys with ice, when the shopping days dwindle and the nights draw in, I always find the time to settle down in an armchair and read Paul Auster’s Christmas story. I’m a big Auster fan, have been since The New York Trilogy all those years ago. I think he has a certain irresistible melancholy, a way of looking at the world that sums up the connections we have to everyone else, the little co-incidences that culminate to make life bearable. I also like the fluctuation of emotion; one minute amused, then puzzled, then sobbing uncontrollably, and there’s the beautiful sparse yet poetic prose, something every writer should aspire to create. My husband bought me a copy of the illustrated hardback edition of Auggie Wren’s Christmas Story a couple of years ago; the pictures, by the Argentinian artist Isol, are an excellent addition and somehow make you believe you are holding the story in your hands. The book is such a beautiful thing to own, pressed with a burgundy linen finish; the story unfolds over shiny black and white pages, pairs of which are given over entirely to the illustrations. It is an example of why some physical books will always endure. I love my kindle, but you can’t get the same frisson of excitement from the kindle edition, you don’t feel the weight and quality of what you are about to read, it’s like opening and expensively wrapped bar of chocolate and letting the first square melt in your mouth. The book is one of my all-time favourite Christmas presents and that’s before I even get to the story. 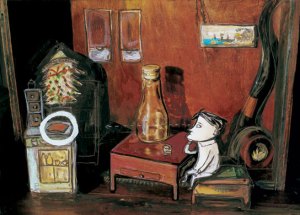 Initially written for the Christmas Day edition of the New York Times in 1990 (then used as a plot in the 1995 film Smoke) Auster has always maintained that he set out to write an unsentimental Christmas story (or, on reflection, perhaps that is just the character ‘Paul’ in the story). Whichever, I’m not sure he succeeded; the story is sentimental, heart-warming even, it gives you the required festive glow but there’s also a gritty side, an element of loneliness and desperation running throughout. For me this combination of hope and realism is what (plus an enviable mastery of structure) makes it a classic. Isn’t this what A Christmas Carol is all about, It’s A wonderful Life? That even in the depths of despair and loneliness there’s room for a little human kindness?

I won’t go into detail on the plot because you should really read it for yourself, suffice to say, it concerns a ‘fictional’ author trying to fulfil a commission to write a Christmas story for the New York Times. He is well and truly blocked and explains his predicament to the owner of a cigar store he frequents, Auggie Wren. Auggie takes photographs of the same spot every-day; the results are described thus;

‘Auggie was photographing time, I realized, both natural time and human time, and he was doing it by planting himself in one tiny corner of the world and willing it to be his own.’

In the context of the story, Auggie’s photographs show us the connection of the individual to the bigger picture, as the seasons change and regulars mingle with unknown faces, ‘living an instant of their lives in the field of Auggie’s camera.’

‘Once I got to know them, I began to study their postures, the way they carried themselves from one morning to the next, trying to discover their moods from these surface indications, as if I could imagine stories for them, as if I could penetrate the invisible dramas locked into their bodies.’

Auggie himself offers such a story, ‘the best Christmas story you ever heard,’ in exchange for lunch.

In the opening paragraph of the book, Auster sums up what is going to happen,

‘I heard this story from Auggie Wren. Since Auggie doesn’t come off too well in it, at least not as well as he’d like to, he’s asked me not to use his real name. Other than that, the whole business about the lost wallet and the blind woman and the Christmas dinner is just as he told me.’

Every Monday I run a reading group at the First Base homeless charity in Brighton, we read this story yesterday. They loved that bit, the idea that you could pre-empt your story in the first few sentences and still have people read on. But I think the way that opening is written makes it impossible for you not to read on; you know so much from it and yet, not enough. You know that Auggie doesn’t like the way he comes across, that there is some flaw in his behaviour, so from the off you know that the story isn’t all candles and mistletoe but you also have the potentially sentimental elements of a lost wallet, a blind woman and a Christmas dinner. Already you are guessing what will happen, you are participating in the invention of a Christmas tale. This is my favourite type of story, one in which the reader plays as big a part as the author. At the end of Auster’s story we (and Paul) are left wondering if Auggie hasn’t made the whole thing up to dupe his friend out of a free lunch. The reader is left to decide, is it true, made up or a little of both? Is Auggie a nice guy or not? Does it matter, so long as the story offers some insight into the human condition, a desire to spread goodwill amongst our neighbours, a little hope for the Christmas season? As Auster says, ‘As long as there’s one person to believe it, there’s no story that can’t be true.’

The story appears, wordless and in full at the end of Wayne Wang’s movie Smoke, overlaid with Tom Wait’s Innocent When You Dream.

I have written my own Christmas story, The Christmas Dragon. It’s nothing like this one, I’m not that good! It’s for children, for a start, I wrote it for my son’s last year and I hope it has, at least in part, achieved the goal of being in the main unsentimental. I wanted to make a real issue fun, so I wrote a kid’s story about climate change. There is Santa, polar bears and a dragon and, above all, there is hope.