Last year I was signed by British crowd-funding publisher Unbound and now my short story collection about fame, 15 Minutes, is almost ready for release. Yesterday I was sent the final cover proof and I’m sure you will agree that it is an arresting image!

Writers don’t usually get any input in their cover designs. With my first book, Starlings, I was just sent the finished cover with a note saying ‘here’s your cover – hope you like it.’ Bizarrely that cover looked like the front of my house at the time. In the first few months of editing Unbound Digital send their authors a questionnaire to fill out for their cover designer Mark Ecob to work from.

It’s quite a long document and it really makes you think about the book you have written. The questions vary from the practical; title, buy-line, genre, to, ‘Describe the tone and mood you want to come across on your cover,’ and, ‘who do you think your readers are?’  These questions really make you think about your reader. Who is going to buy your book? What are their age, gender, interests? They even ask how they will buy it and where from. As a writer I have to admit I don’t actually think that much about my reader, certainly not when I’m writing, but in order to sell you have to know who you are appealing to. The first reader I listed was ‘short story enthusiast’. Then came the question about genre and the book is obviously made up of short stories but  I realised there and then that each story is its own beast, there’s literary fiction and sci-fi and experimental fiction and memoir and  it became very hard to pin down.

I was asked for a synopsis, again something the writers of short story collections will know is an almost impossible task, I provided key words and a list of the celebrities in the stories. I tried to get across the idea that fame is not necessarily a good thing. At one point I suggested that if there was a face on the cover it should be hidden in some way, blinded by paparazzi flashbulbs perhaps or masked.

Finally, they ask you what sort of cover you have in mind. This was a curve ball – I didn’t have anything in mind. I made a few suggestions. The Warhol connection was the obvious route, pop-art, bright colours, paparazzi photos. I also had to send an extract and I picked one from a story about a man obsessed with Scarlett Johansson.

Mark phoned a few days later. Surprisingly he didn’t seem that keen on a Warholesque cover but had picked up on the idea of fame as artifice. We talked about masks and dropped cameras. Then I mentioned that the last story was a flash fiction about a talking ape and Mark asked me to send it to him.  A few days later he sent over a series of ideas but the one that was the basis for the final cover was the standout. Not Warhol, not pop-art but the suggestion that fame is nothing more than a performing monkey seemed to sum up what I was trying to say.

The proposed cover designs then went to Unbound and I had a long wait before finally getting to see the finished cover complete with cover quote and blurb.  Seeing the finished image brings home the fact that this book is really happening and I am absolutely thrilled that soon you’ll be able to read my take on the masks and artifice of fame. 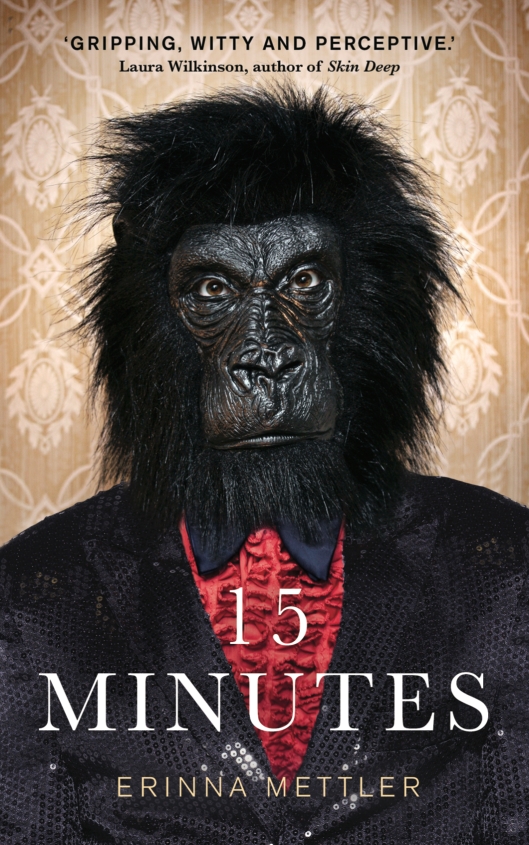