I had a letter printed in The Guardian this weekend. It wasn’t my first but it will probably be my last. It all stemmed from Hello Dolly! a fashion shoot they published in honour of this year’s Glastonbury Queen, Dolly Parton. They printed several glossy pictures of a tall, thin and very beautiful young woman in a blonde curly wig wearing cow-girl shirts and country dresses. There were cowboy boots and rhinestones aplenty but rather surprisingly I thought, for a Dolly tribute, there were no discernable breasts. Their model was cigarette-shaped. It looked wrong. Dolly wouldn’t have been able to do up any of the clothes on show.  I showed it to my husband and said, ‘There are a couple of things missing from this photo-shoot.’ He laughed aloud. It was a good line. I felt compelled to give it to a wider audience. I was also a bit annoyed with The Guardian for resorting to the usual ultra-thin type rather than using someone short and curvy like the woman herself. Now I know Dolly’s aren’t real, she’s like a pencil with airbags, but surely they could have found someone a bit more pneumatic. There must be some curvy models out there. Would they have taken clothing inspired by Twiggy and stretched it over a 34GG model?  I don’t think so. I shouldn’t be surprised I suppose, their attempt at fashion inclusion, the regular ‘All Ages’ feature, consists of five very thin women who sometimes have grey hair. ‘What’s wrong with breasts?’ I thought, feeling a bit self-conscious. The truth is women are getting weightier and so are their breasts. Do we really only want to see stick-thin models in magazines? Isn’t there room for a bit of variety? I crossed my arms in front of my chest and emailed this, (it’s hard but not impossible!)

I notice there are a couple of things missing from your Hello Dolly! fashion shoot. A wasted opportunity to use a shorter curvier model perhaps, rather than the predictable cigarette-shaped one.

There was something missing from your Hello Dolly! fashion shoot (28 June): a wasted opportunity to use a shorter, curvier model, rather than the predictable cigarette-shaped one.’

I’m not going to talk about the grammatical error in their version, which implies that a wasted opportunity is missing from their fashion shoot. My punctuation isn’t strictly correct either, it’s shorthand, but do we have to get all Michael Gove about a jokey email? What bothers me is the removal of all reference to Dolly’s guns. In replacing ‘a couple’ with ‘something’ they have taken the humour out of the original comment and made me sound like a boring PC moaner. Not only did they leave breasts out of the original fashion shoot, now they have surgically removed them from my correspondence. I’ll say it again, ‘what’s wrong with breasts?’ I’ve got them and so have a lot of other people. Some people have small ones, some big, some medium sized. Mine are much bigger than they were when I was a whispy youth. I like to see this as a little trade-off for the middle-aged spread which is, er, spreading. I’m quite proud of them in fact; they are a big part of me, though sometimes they do get in the way when I’m eating. 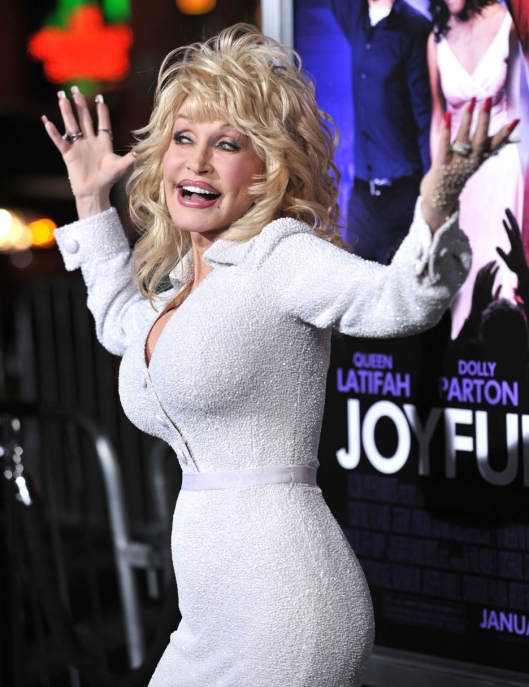 I posted my disappointment on Facebook and one friend told me his father had had several letters published, on which he had worked on for hours to find the right bon mots, only to discover that all the humour had been edited out. Another complained that an obituary he had written about a comedian had had a fart joke removed. Come on broadsheets where’s your sense of humour? See how easy it is to destroy meaning with a little over-zealous editing? Is ‘a couple’ really so offensive that it can’t appear in the letters page? In the second paragraph of her article in the same magazine, Caitlin Moran uses the word ‘cunt’; surely ‘a couple’ wouldn’t cause offense in such a liberally-minded publication?  Perhaps I should have used an even more ambiguous word. I asked my friends for suggestions of words for breasts and this is what they said: