I wrote this after a discussion at a recent meditation class. It’s just a bit of fun but seems appropriate to post on the day that the giant Trump baby makes an appearance at the ‘it was never a state visit, protests don’t bother me – FAKE NEWS!’

The white room is in the city but surrounded by trees that filter out the sound of traffic. Birds sing from their branches and the leaves rustle in accompaniment. The white room in the city is quiet save for this natural music and the soft in/out breath of those assembled for weekly lunchtime meditation. The meditators sit in ordered rows on institutional burgundy chairs but are all shoeless, their bare soles placed square on the floor. Some – the ones who look lithe and carefree – bend themselves with ease into the lotus position on the pale carpet, hands on knees, their backs pole straight. In the white room in the city, three golden Buddhas look down with benevolent smiles on the faithful, offerings of saffron-coloured flowers at their feet, goldfish bowls of crystal water, smoke rising from incense and candles.

In the white room in the city your back is already beginning to hurt as you close your eyes, lulled by the soft monotone of the leader. You lose her words for a moment as you consider how a Scottish accent is now almost a pre-requisite for guiding meditation. All the leaders lately are Scottish. It’s getting boring. You imagine a Geordie one or an Aussie like the one you have set for Siri.

‘Feel the breath on the in.’ She intones, ‘and then on the out.’

You concentrate on your breathing, your nostrils tickle and you have to hold your breath to smother a sneeze, letting out a loud exhalation that causes the person next to you to shift in their chair.

In the white room in the city the leader tells you that this meditation is called Cherish Others. You think of Madonna and the long hot summer of 1989, when you ran through the warm waves on a Southern Indian beach and didn’t actually need daily meditation to free your spirit but did it anyway because the instructor was a cute Canadian called Brad. Every night the two of you danced to Madonna on the shore in the moonlight as the wind caressed the palm trees. It was your song.  Brad’s lips tasted of salt. In the white room in the city you wonder what happened to your long lost lover and almost sing along to the song in your head.

‘When we cherish others we cherish the universe. If you wish peace for the person sitting next to you it has a knock on effect, spreading love throughout the world.’

The beach and Brad disappear, leaving you in the white room in the city surrounded by a collective unconscious but totally alone. Perhaps you will go back to India this year. Perhaps you will look up Brad on Facebook. There can’t be that many of them. You remind yourself to concentrate really hard on the in and out of your breath.

In the white room in the city you think about wishing your boss well but the thought of him brings to mind the sensation of his hand on your arse and the promotion that passed you by a few days after you told him you were reporting him to HR. You feel anger building in your stomach.  There is a loud rumble and your mouth waters at the thought of the spinach and beetroot quiche you will all soon have for lunch.

‘If we can learn to wish our neighbours well we ourselves will be at peace’.

In the white room in the city you think about your neighbour and the constant, bone-shaking  ‘music’ which gets turned up when you knock to complain.  You think of the dog poo on the path, something you suspect to be intentional but something you can do nothing about without more abuse. Instead of wishing them peace and happiness you wish that the ugly squat dog will turn on his keeper, and you imagine slashing teeth and saliva and buckets of blood. You smile as you hear your neighbour’s screams. Get him off me! he shouts at you. Sorry you say, can’t hear you – your music has made me deaf. In the white room in the city you allow yourself to smile.

‘When we cherish those who have done us wrong, the burden of hate is lifted. Forgiveness is like a warm healing light.’

In the white room in the city you try to cherish your ex. You know you should wish him all the happiness in the world. You were not a good match. He is far better off in the flat he shares with the woman who was your best friend until he sent you a text message meant for her. The wedding date is set. They didn’t invite you but all of your friends are going. You find yourself wishing that masked men will break down their front door and take them hostage, torture them in indescribable ways and then blow up the house – including the traitorous pug Mr Biscuits, who you used to walk every day when your ex was ‘working’ and who you now blame for your expanding waistline.

You heart rate increases and your realise you are panting rather than breathing. More than the average number of meditators seem to be shuffling in their seats, maybe it’s not only you having a hard time finding someone to cherish.

‘Calm,’ soothes the leader, picking up on the distraction. ‘If you find you mind wandering come back to the breath, feel the cool air entering your nostrils and the slightly warmer air come out. Send a cherish wish out to your chosen person and hold it deep in your heart.’

For fuck’s sake! You can’t think of anyone who won’t make you forget how to breathe. Mother? Not since the argument about your driving. Sister? Not since she commented on your expanding waistline. You grapple feverishly with your thoughts, suggesting and rejecting recipients of the cherish wish. You are a terrible person.

‘If everyone cherished everyone in the world, there would be no more war.’

The breathing throughout the room settles into a symbiotic rhythm. You relax your shoulders and let yourself float, breathing in and out with one face in your thoughts.

In a pushily decorated room in a white house, thousands of miles from the white room in the city, sits an old orange man. His hair matches his skin, his eyes are slits and his jaw is set hard, lines scrunched across his forehead as he listens to his advisors. The press he still trusts are assembled, a bank of photographers ready to capture the historic moment. The old orange man is about sign an order that will tighten the country’s borders. One of the results of the order will be the enforced removal of children from ‘migrant’ parents. They will be placed in detention centres, separated and alone. Babies as young as 3 months old will cry for their mothers and be fed formula to quiet them before being shipped off to adoption centres. Five year olds will be locked behind bars, with a bucket for a toilet and a foil blanket for warmth. Most will never see their parents again, mobile phones will be confiscated and children’s names will be lost, the cost of reuniting on deportation will too great for the world’s most civilized nation. Families will be buried under red tape and poverty.

As he lifts his pen with a flourish the old orange man feels a great rush of well-being. His whole body glows from within. It’s as though a giant pair of hands has scooped him up and is swaying him gently to and fro.  The sensation takes his breath away. He closes his eyes and is transported back to the family home in Queens, to the small square of grass that served for a backyard throughout his first four years. Birds sing and the sun beats down. His mother sets up a sprinkler and he runs back and forth with his siblings through the cooling shower, surrounded by a prism of refracted light. His mother sits on a lawn chair under and enormous hat and watches her children, a smile spreading across her face. Soon there will be hotdogs and cola for tea and when his father gets home he will carry his youngest son up to bed and tuck him into freshly laundered sheets as sleep takes him instantly and he floats on the conscience-free clouds of a child lucky enough to be born into a privileged family.

The plush room in the white house is silent. The assembled hold their breath in anticipation. When the old orange man opens his eyes, the tears collected behind his eyelids spill over and fall onto his cheeks, streaking his tan. He knows in his heart that he has felt the hand of God; the universe has spoken to him and told him that all men feel water drops through dappled sunlight in the same way. He sighs, brushes away the tears with the back of his hand and signs the order anyway. Blinded by the staccato flurry of camera flashes he feels his jaw tighten.

In the white room in the city the leader tells you to relax your concentration and, when you are ready, to open your eyes. The room is filled with sighs and clicking neck bones. Everyone is smiling. Some people hug each other.

‘Thank you,’ you say to the teacher as you leave. ‘I really feel like I made a connection there.’

‘Namaste,’ she replies, bringing her hands together and bowing her head. 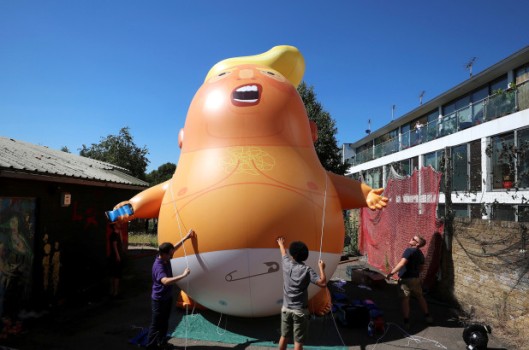