I’m almost done reading for the Brighton Prize 2018. I’m one of the judges along with ace author Alison MacLeod and literary agent Sarah Manning. There are 10 stories in each category, short and flash, whittled down from over 600, all anonymously, thanks to Prize Director Alice Cuninghame who had the not insubstantial task of co-ordinating everything. It was made slightly more difficult by people not telling us the stories they had submitted had been shortlisted elsewhere but this is a minor quibble. We are writers too so we know how difficult it can be to wait for news of submissions but if you are entering a writing competition please read the rules to save yourself, and the organisers, time and money.

I must say I am impressed by the standard of stories so far, there are a couple that are utterly brilliant and I’m looking forward to discussing who should win at the judges meeting later this month. It’s always interesting to see who favours what. I’ve been doing this for four years now and sometimes arriving at the winners is easy because there is a clear favourite from the off and sometimes it takes hours of discussion. It’s also interesting to see who wins as I don’t know who the writers are until we have arrived at our winners and Alice tells us who wrote what. There are usually familiar names in the shortlist, Rattle Tales regulars or previous short-listees but now we are truly international, it could be anyone.

Writing competitions were making waves on Twitter this week. Some people shared news of a free to enter American flash fiction contest promising cash prizes, who listed this rule in their entry requirements;

Obviously it’s nigh on impossible to write a flash fiction without using those letters so they won’t get many entries. Seriously though, how is LGBTQ fiction equatable with graphic violence and explicit sex in the year 2018? Apart from the fact that it reads like a Brighton Prize wish list, how can a modern writing contest get away with a rule like this? Well the answer is that they can’t, not without some serious shade, over on Twitter there was much swearing and profanity (as they are obviously very different things!) and several writers posted the LGBTQ entries they had submitted to the competition. Clearly the organisers can chose to prohibit any type of story they want, it doesn’t say no LGBTQ writers so it’s not actual discrimination but it is de facto discrimination and this is why writers reacted the way they did. Never rile the seemingly placid writing community; our teddy bears have vampire teeth, potty mouths, explicit sexual encounters and a back catalogue of horrific torturous deaths just waiting to be tapped into. Faced with the outrage the competition organisers changed their rules to this;

§  All contests have parameters. We are not interested in the following genres:

§  Stories with swearing or profanity

§  LGBTQ – some have asked if they can use gay characters. It depends on the story and how it is written. The judges will make that determination.

There’s no way anything interesting is winning this competition. This level of open discrimination is pretty shocking but not surprising. What did warm the heart was the response of the writing community; people who had shared the comp unaware of the rules soon removed it from their feeds and websites. Big shout out here to The Short Story who tweeted the following offer;

Hi! In light of recent news on Twitter re comps etc., I’m looking for 2 LGBTQ+ writers who’d be interested in reading for a pop-up fiction sub window we’ll be having in early December. Pls email – rupert@theshortstory.co.uk outlining relevant experience & we’ll go from there!

So you don’t need to enter a creative writing competition with no imagination, go instead to a place of tolerance, which publishes some of the best flash fiction on the planet.

The winners of The Brighton Prize will be announced at an awards event at The Brunswick Pub  on November 18th, 2-5 pm.

Views expressed here are my own.

I did one of those Twitter thread thingies today – about writing and submitting short stories. I have pasted it below.
15 Minutes‏ @ErinnaMettler

On March 17th I’m giving a talk on #shortstories @bh_writing conference in #Brighton as a director and judge of @BrightonPrize Here’s a thread about what I wish I’d known when I started out 10 years ago. 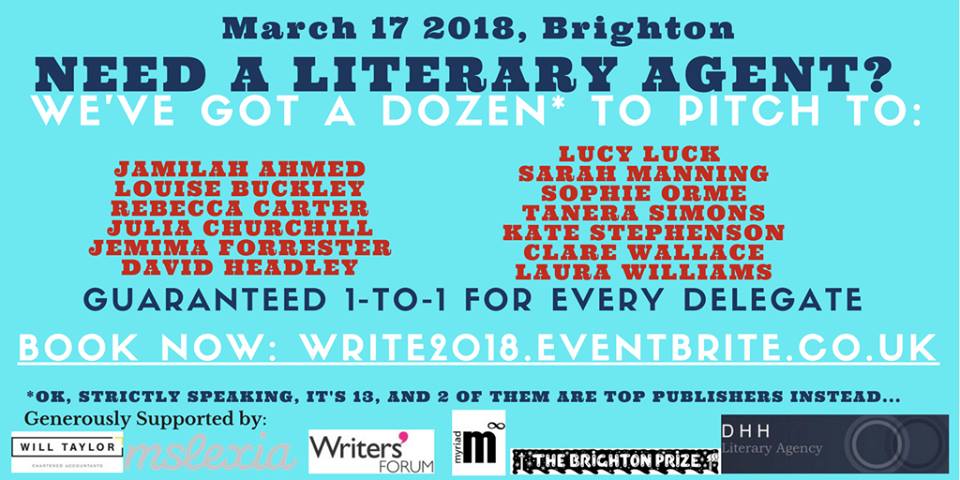 It’s been a long summer and I’ve been quietly working behind the scenes. You’ll be pleased to know that my collection has been edited, with immensely helpful input from Unbound, and is as a result a much better book. It also has a new title. Gone is the over long full Warhol quote; the book will now be published as Fifteen Minutes. The editing was an interesting process. A lot of the stories had already been professionally edited but, in my experience, things can always be improved on. The copy of my first novel that I take to readings has writing all over it where I’ve added or cut things from the printed text and that was published five years ago! A book is never finished but hopefully this collection is now at its best. I am very happy with the editorial decisions made so far. Sometimes I kept things the way there were, simply out of gut instinct, anyway between us we’ve come up with something I am extremely proud of. I can’t wait for you to read it. People keep asking me when and the answer is ‘soon’. The book has been sent for copy editing, which I am told takes about 3 weeks and then – who knows? But it will be soon and I will keep you informed every step of the way. Even though the book is 100% funded there is still time to support it. If you love short stories and think they should get their due credit in the publishing world please pledge via Unbound you will help raise the profile of the short story and get your name listed in the book as a supporter.

In the meantime, one of the stories has been published in a much redjuced form in a beautiful little book called Tales On Tweet. This is the origin of the story Ruby of the Desert. The full story has also been shortlisted for Huddersfield University’s Grist competition and will appear in their anthology early next year. I’ve also been working on the idea of turning it into a novel. Tales On Tweet is a Twitter account by Indian writer Manoj Pandey. A couple of years ago they asked for 140 character stories, this year they chose a bookfull to be illustrated and published by Harper Collins India. There are stories by Margaret Atwood, Salman Rushdie, Teju Cole and lesser mortals like me. It was quite hard to get hold of a copy, the first one didn’t arrive and I had to turn to Amazon Marketplace to get one. The book is gorgeous and wise and each tale is illustrated by Yuko Shimizu, a Japanese Illustrator based in New York. I love my page (even though, or perhaps because, they spelled my name wrong!) I love how it sums up the tale by creating the heat of a diner kitchen and the passage of time through the sheer number of teabags. Does the waitress win the lottery? I think your answer to that says more about your personality than mine.